In October 2010, I photographed James Hirata along with his mom, Taka Hirata (age 104). James was seventeen years old and living in San Francisco when his family was ordered to pack up and move to the Tanforan (CA) Assembly Center, and eventually the Topaz (Utah) Relocation Center. I was amazed when James told me that he had very fond memories of both Tanforan and Topaz (listen below). He said there was very little for a teen-age boy to do in San Francisco in the 1940's, but he loved the open space, fields and desert of Topaz, as well as the mud at Tanforan.

After the war he moved to Palo Alto with a friend that he had met at the Tule Lake internment camp. When I photographed James, he was 85 years old and still operating his own landscaping business.  James and Taka were the first people I photographed who had been incarcerated at Topaz. 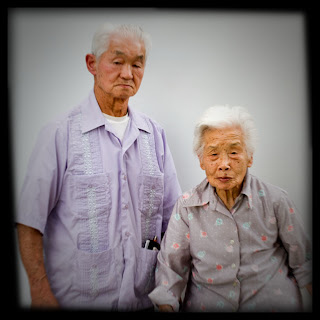 Listen to some of James' memories of San Francisco, Tanforan, Topaz and Tule Lake:
You can also read the TRANSCRIPT of the above interviews.