"FBI agents, three of them came to our house. One was in my little bedroom and he checked under the bed and between the mattresses and all the drawers and he found my diary. And I was just totally embarrassed. I just wanted to run in there and grab it away from him. And then I knew that if I did something rash we would get in more trouble so I just sat there, and grit my teeth, and I just hoped that he would find it boring and put it away, but he didn’t. He just kept reading it and reading it, while I was just sitting there humiliated and embarrassed."
- Kiyo's interview with Face-to-Face.

In July of 2011 I had the opportunity to photograph someone who was a huge inspiration for this project. After I first got the idea for this portrait project, I spent almost one year thinking about it, but never getting started with it. One morning I was listening to the Forum radio show on San Francisco's KQED public radio station. They were interviewing a lady from Sacramento named Kiyo Sato. Kiyo is former internee of the Poston internment camp.She was discussing her book Kiyo's Story, which described her life growing up on a strawberry farm in Sacramento, CA before the WWII. After Executive Order 9066 was signed by President Roosevelt in 1942, Kiyo was forced to drop out of Sacramento Junior College. She and her family were forced to leave their farm in Sacramento, move to temporary housing at the Pinedale Assembly Center, and were eventually incarcerated at the Poston Interment Camp in Arizona.

After listening to the radio broadcast of her interview, I realized it was time to make the move from just thinking about this portrait project, to getting started meeting and photographing former internees. I had always considered Kiyo's radio interview the real impetus to get this project moving. In June, 2011, the Japanese-American Museum of San Jose told me that Kiyo was coming to San Jose to give a reading from her book. Eva Yamamoto put me touch with Kiyo, and I arranged to meet her before she returned to Sacramento.

Kiyo's Story provides an amazing look into the Japanese-American experience before, during and after the forcible incarceration of over 100,000 Americans during WWII. Kevn Starr, author of California: A History described it as ",,, a magnificent memoir, fully worthy of being compared to Farewell to Manzanar.” You can buy your own copy from The Manzanar Store. 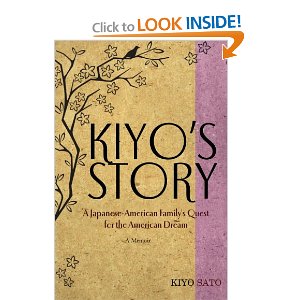 Since Kiyo is a well-respected author, there is already a lot of great audio and video and transcribed material about her on the internet. For this reason, I did not conduct my own interview when I met her to take her portrait. Instead, I'll include links to the other resources about Kiyo available on the internet.