Joe Yasutaki was the third person who sat for a portrait for my Kioku project. I had met Joe one year earlier at one of the events sponsored by the Japanese-American Museum in San Jose. As vice-president of the museum, Joe saw me at many other events until I got to the point where I actually started taking formal portraits for this project. 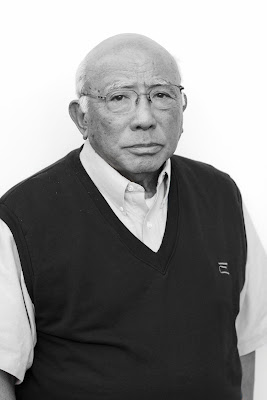 
Joe Yasutake was nine years old when Executive Order 9066 forced his family to leave their home in Seattle, WA. While they and hundreds of other Japanese-Americans were boarding the train for the assembly center in Puyallup, WA, a news photographer took a photograph of the crowds waiting to be moved out. Joe and his sister instinctively smiled for the photographer. Their photograph appeared in the Seattle newspaper with a caption pointing out how happy they appeared to be because they were being treated so well.

Joe was eventually interned in the Minidoka War Relocation Camp in Idaho, and the Crystal City camp in Texas. He is currently vice-president of the Japanese-American Museum in San Jose.
Posted by Andy Frazer at 1:00 AM