In January, 2010 I had the honor of photographing Lawson Sakai. When I originally began this project, I had planned to only photograph people who had been held in the internment camps. But at that point, I had never even heard of how some Japanese-Americans had served in the 442nd Regimental Combat Team. I also didn't realize that the all Japanese-American infantry was the most decorated unit in U.S. military history for its size and length of service. 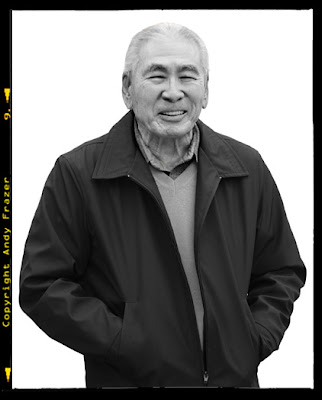 Lawson's family was not interned during World War II because they were living in Delta, Colorado, which was not inside the designated "Exclusion Zone". Lawson tried to enlist the day after Japan attacked Pearl Harbor, but he was refused because the government classified him as an "Enemy Combatant". But when the rules changed in late 1943, Lawson enlisted immediately. As part of the 442nd, he saw action in Italy, and later in the Battle of Bruyere, France; as well as the Rescue of the Lost Battalion in the Vosges Mountains in 1944, where he was seriously injured.

This photo session with Lawson was the first time that I was able to record some good quality audio interviews directly with my DSLR camera.You can listen to those interviews by clicking on the links below:

Lawson is currently the president of the Friends and Family of Nisei Veterans organiztion, which supports and promotes former members of 442nd infantry. There is also a fascinating article about Lawson's military career in the Gilroy Dispatch newspaper.
Posted by Andy Frazer at 1:00 AM