Last month I was asked to photograph the grand opening of the Japanese-American Museum of San Jose. As part of the opening, the museum featured an exhibition of Chiz Sugita's watercolor paintings of her memories of growing up in the Poston War Relocation Camp (Poston, AZ). Six months earlier I read the book that accompanied her watercolor paintings, so I contacted Chiz and asked if I could meet her prior to the grand opening ceremonies to photograph her portrait. She graciously agreed.

Chizuko Judy Sugita de Queiroz was nine years old when her family was forced to sell their home in Orange County, CA in order to report to internment in Poston, AZ. Her dad sold his bonsai nursery to Walter Knott, of Knott's Berry Farm, with an agreement that he could buy it back after the war. When they returned in 1946, Walter Knott failed to honor his contract. Her dad lost all of the stock to his business, and their personal possessions had been stolen. 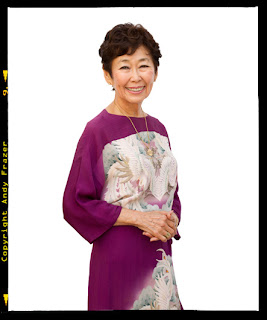 (Photo by Andy Frazer)
Chiz received her Masters in Art at California State University, Dominguez Hills. She subsequently taught in the Palos Verdes School District, where she became the Art Department Chair.

I met Chiz Sugita in 2010 when I was asked to photograph the Grand Opening ceremony of the Japanese-American Museum of San Jose. The museum was hosting a show of Chiz's watercolor paintings from her series Camp Days 1942-1945. I was already familiar with Chiz's work after reading the book that accompanied her project. After graciously arriving early to let me photograph her formal portrait, I photographed Chiz in front of a few of her paintings.


I told Chiz that her painting Girl Scouts (immediately to her left in the above photograph) was my favorite because of the wonderful story that accompanied it in the book:


"Pretending to be Girl Scouts, we hiked to Clay Mountains. Lost, exhausted and thirsty, we finally made our way home after ten hours. We were so excited to see the outline of our camp against the sunset sky. No one had missed us, since it was still light outside at 7pm."
Posted by Andy Frazer at 1:00 AM