In October, 2010 I photographed a member of the Tule Lake Committee: Fran Ellis. Not only does Fran live within two miles of my home, she was the first person I've photographed who was born in one of the War Relocation Camps.

Fran Ellis' dad was drafted into the U.S. Army in February, 1942, just a few days before President Roosevelt signed Executive Order 9066. Fran's mom was four months pregnant in May of that year when the family got their order to leave their home and report to the Walerga (Sacramento) Assembly Center. The family appealed to the American Red Cross so that her dad could get a temporary leave from the Army in order to come home to help them pack up and report for internment. Fran was born in the Tule Lake concentration camp later that year. 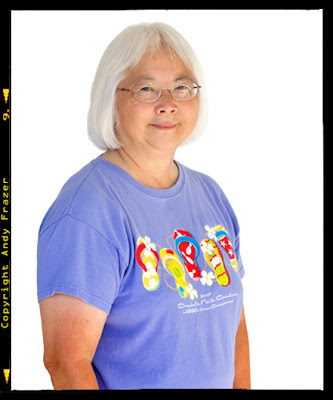 (Photo by Andy Frazer)
Fran's father was a kibei, a term given to people of Japanese descent who were born in the United States, educated in Japan, then returned to the U.S. before the beginning of World War II.  Because of his valuable knowledge of the Japanese language, he was offered a position in the Military Intelligence Service, which worked to translate Japanese military communications. He refused the position due to ethical principles, so he was reduced to the rank of Army 'buck' Private from Army Private First Class, then sent to the 1800th Engineer General Service Battalion. This battalion consisted of soldiers who were considered trouble-makers by the military. Their responsibilities generally consisted of repairing ground that had been damaged by military tank exercises.

Today, Fran is on the Tule Lake Planning Committe for the Tule Lake Pilgrimages, as well as being a committee member of the Nihonmachi Outreach Committee


When I photographed Fran, we were also joined by Jacqueline Ramseyer, a photographer from the Bay Area News Group. Jacqueline was working on a newspaper article about my entire project. The article appeared in the Sunnyvale Sun a few weeks later, and was also picked up by the San Jose Mercury News a few days after appearing in the Sun.
Posted by Andy Frazer at 8:23 PM